Last week while driving home a lynch mob of Jew-hating Arabs attempted to murder Zehava Weiss and her female passenger by stoning her car. Here is the video.

Zehava writes about her terrifying ordeal.

What Happened to Me on Tuesday Last: 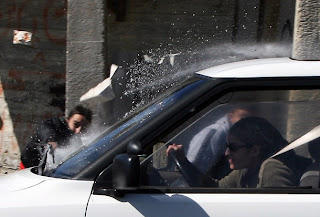 This past Tuesday, 28 Shvat – February 21, I was returning home to Karmei Tzur from Efrat where I work.

At the Gush Etzion Junction I collected a female hitchhiker who got into a back seat since the front passenger seat was where our infant seat was affixed. What luck. While traveling between El-Aroub and Bet-Omar on the ascent I noticed a car approaching from the opposite direction with a damaged front window from a rock that must have previously landed. I naively presumed that that was the result of an old incident that hadn’t yet been fixed.

When I came close to the gas station at Bet-Omar (a location that usually requires a driver’s attention due to wrongly parked taxis, bypassing and pulling out into the highway in a careless manner), I observed a man running across the road from right to left. I first thought that this was a soldier with a rifle and I slowed down to grasp what was happening. I then noticed dozens of people, old, young and teenagers, congregating on my right. It then became apparent that the “soldier with a rifle” was actually a photographer with a camera. He was seeking a better picture angle to snap away at what was about to happen. On my left were at least two other photographers, waiting for the action. I should emphasize that I was not the first victim and other cars had already been stoned and so these press photographers were well aware what was happening and was about to happen to me. None of them, it seems, thought to call for assistance from the police or IDF none of whom were present.

Knowing I had no choice but to continue and surely not stop for otherwise, if I had slowed down, I would have been trapped and blocked off, the only thing in my mind was to proceed home and not get caught at that crossing. It was difficult to pass through as the rocks came from a distance of just a few feet from the car, ‘zero-range’ as we say. The rioters clearly could see that the car contained two young females, defenceless. We were struck by many rocks, my view was blocked by the cracked glass and I simply concentrated on getting out of there as quickly as I could. At the time, as well as at this moment of writing, I did not fully grasp the danger of our situation.

It was only when I arrived home that I realized the entire front of the car was covered with shattered glass particles including me, the infant seat, the back seat, everything. There was also damage caused to the sides of the car. At least eight large rocks and blocks had hit my car. I learned the rock-throwing continued for a good few minutes afterwards with the resulting damage to other vehicles as well as psychological damage to the drivers and passengers.

Then I had to tell my children what happened in a normal, non-hysterical fashion so as to prepare them for further conversations that they would hear from grownups talking about the incident.

This is the first time I experienced such a serious and difficult incident as this and pray it is the last. And we have been living in Karmei Tzur for the past eight years. But now I know from first-hand experience with surety that rockthrowings occur all the time, especially on Highway 60 between the Gush Etzion junction and Halhoul. My first-grade son’s transportation has also been stoned.

Another point: these terrorists had no qualms about not covering their faces during their attempt at murder.

We try to overcome the fear and to live our everyday life. We are believing people, with faith. After an incident like this we will pronounce the benediction “Blessed is He Who bestows good things on those unworthy, and has bestowed on me every goodness”. We believe in goodness, and that it will overcome evil. We only pray and hope that people in Israel and around the world will finally recognize the truth, that our enemies, the Arabs who fight us wish for evil, they want destruction, while we wish for good and want peace, even with our neighbors. We wish for life.