It seemed like such a simple request: to photograph a grave in a nearby cemetery.

“She is buried in the American Cemetery in Jerusalem,” Robert Avrech wrote in July 2011 at the end of his post about Joan Winters, an American actress who was found murdered at the foot of the Mount of Olives in late 1933. “If any of my readers in Israel are so inclined, I’d greatly appreciate it if you’d visit Joan’s grave, make sure it’s properly maintained and perhaps send me a picture.”

The double murder of Joan Winters (which was her stage name; she was born Carol Vesta von Niedergesaess) and her companion, Mohamed Karamini of India, remains unsolved. They may have been random victims of the Arab riots that gripped pre-state Israel at the time. Another possibility is that they were victims of a love triangle: they had been traveling with a third companion, a man from India named Mohammed Ikram, who was detained and questioned about the murders and released for lack of evidence.

The American Cemetery where Joan Winters was buried in early November 1933 — now known as the Alliance Church International Cemetery — is a fifteen-minute walk from where I live. I’d visited it many times, and while I didn’t remember seeing a marker with Joan’s name on it, I’d also never looked for one. So, I figured, I’d grab my camera, walk to the cemetery, find the grave, take a photo and email it to Robert. Nothing could be easier, right?

The Alliance Church International Cemetery is located on Emek Refaim Street, the main street of the south Jerusalem neighborhood where I live. Once a sleepy, unregarded thoroughfare, Emek Refaim Street has been transformed over the past decade into a lively hangout full of shops, restaurants and prime real estate. Its two historic cemeteries — the Alliance cemetery and the German Templer cemetery next door — lay neglected for decades. But as Emek Refaim’s popularity grew, interest in the cemeteries and their history increased as well. The Alliance Church hired a man named Meir Aharony, who has extensive knowledge of the cemeteries and the history they contain, to supervise their renovation and upkeep. But Meir’s responsibilities went far beyond overseeing the cemeteries’ maintenance and giving walking tours. He also had the huge task of reversing decades’ worth of abandonment, disrepair and neglect.

When I told Meir the story of Joan and her murder, he was instantly sympathetic. He took me to the section of the cemetery that held burials from the 1930s. Since it is a tiny section of a small cemetery, the search took just a few moments. Only some of the graves there had markers. Joan’s was not among them.

Meir told me that throughout the long years of the cemetery’s neglect, people had broken in and stolen grave markers to use on their own property. Perhaps, he said, one of the stolen markers had been Joan’s.

“Is there a map?” I said. “Does the Alliance office have a record of the burials here?”

Meir explained that just as the cemetery had lain neglected for many years, so had its documentation. There was no map — or, at least, none that he knew of.

I went home and looked up the online records of every Christian cemetery in Jerusalem I could find. I called the Jerusalem municipality, local Christian organizations and church offices, giving all the names Joan had been known by and spelling out “von Niedergesaess” over and over again. No luck. I called the American consulate, since both the consul and vice-consul at the time had attended Joan’s burial. A consulate official searched the available records and went to the cemetery to speak with Meir. Despite his best efforts, nothing turned up.

Meir and I had done all we could, but with a trail eighty years cold, no leads and no new ideas, we had no choice but to admit defeat.

Since the cemetery is on the main street of my neighborhood, I passed by it often, and when I did, I would say hello to Meir. As he showed me his newest project or told me a story of one of the people buried there, we would ask one another: “Have you heard anything new about Joan Winters?” The answer was always the same: “No,” with a sad smile and a shake of the head.

On a Friday in the middle of February 2013, I was passing by the cemetery on the way to the grocery store. When I poked my head inside the open gate to say hello to Meir, I saw him surrounded by heavy machinery, supervising the renovation of the pathways. Not wishing to disturb him, I turned to go. But before I could leave, he noticed me and called to me to wait. “I have some news for you,” he said. “Go do your shopping, and when you’re done, come back and I’ll show you what I found.”

When I returned, Meir went to the storage shed and pulled out a large, rolled-up sheet of paper with a rubber band around it. It was the cemetery map; he had found it at last! Excited, we returned to the section that held the graves from the 1930s. Meir removed the rubber band and unrolled the map, and we looked at it together. I moved my finger over the rectangles that symbolized the plots, with their names and numbers, until the name listed in Plot 30A, written in pencil, seemed to leap out at me: C. von Niedergesaess. “Meir, that’s it!” I almost shouted. “We found her!”

I wrote to Robert, attaching a photo of Joan’s unmarked grave, covered in a green carpet of the nodding-wood sorrel that seems to grow everywhere in Jerusalem in the spring. Robert invited me to write a guest post with the news that Joan’s grave had been found.

When I returned to the cemetery some time later, Meir took me to Joan’s grave and showed me the work he had done there. He had placed a stone bench on the pathway at its foot and a small stone engraved with a cross at its head, transforming the bare, forsaken spot almost into a place of pilgrimage. As I stood there, moved to speechlessness, Meir smiled and said, “We spent so much time and effort searching for Joan. I didn’t want her to be forgotten again.”

I thought that was the end of the story, but it was not. What happened next was completely unexpected.

In March 2014, Robert forwarded me an email from Mr. Jerry Klinger, the founder and director of the Jewish American Society for Historical Preservation. Mr. Klinger had seen the story of Joan Winters on Robert’s website and been touched by it.

“The purpose of the Society is to identify and recognize sites of American Jewish historical interest,” reads the mission statement on the JASHP website, but Mr. Klinger does even more. Among dozens of projects too numerous to list here, the JASHP has co-sponsored an official historical marker in Georgia to commemorate Leo Frank, who was lynched in 1915 after being falsely accused of the rape and murder of a teenage girl. Mr. Klinger also worked for five years to have the remains of Theodor Herzl’s last descendant, Captain Stephen Norman (born Stephan Theodor Neumann), brought to Mount Herzl in Jerusalem for burial with the rest of his family, and another four and a half years to establish a garden there in his memory.

But Mr. Klinger’s historical preservation work is not limited to Jews. “Your guest piece [on Robert’s blog] struck a chord of interest,” he wrote. “The young girl who died so tragically deserves at least to have her resting place marked.” Mr. Klinger contacted Reverend Roger Elbel of the Alliance Church in Jerusalem, offering the Society’s help in funding a marker for Joan Winters’s grave.

The laying of Joan Winters’s headstone in June 2014, more than eighty years after her death, was the last step in her return from oblivion to memory. The stone bears her stage name and birth name, years of birth and death and a poem that she sent in a letter to her parents shortly before she died. 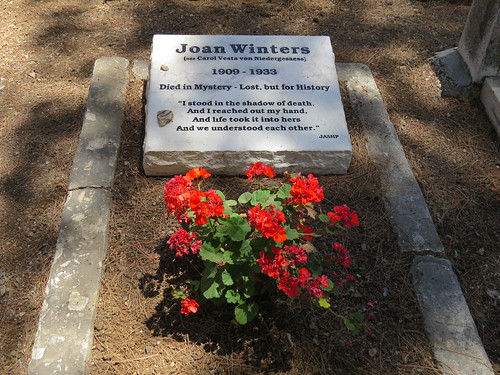 Died in Mystery — Lost, but for History

I stood in the shadow of death
And I reached out my hand,
And life took it into hers,
And we understood each other.

In the bottom right-hand corner are the initials JASHP, for the Jewish American Society for Historical Preservation, the organization founded by Mr. Klinger — who, by his generosity, ensured that Joan’s memory, finally restored after more than eight decades, would never again be lost.