Bret Stephens has an interesting article in today’s WSJ in which he posits that if the PalNazis turned all Gandhi, a Pal state would become inevitable.

For this to happen, the PalNazis would have to stop being who and what they are: Islamic Supremacists, Jew-haters, barbarians.

I once took a philosophy course in college. After surveying all the big boys, from Plato to Kierkegaard to Wittgenstein, I innocently asked the professor what practical application these philosophies had in real life.

My professor looked at me with pity.

“None,” he said, “philosophy is beyond the physical world.”

Which is a pretty good description of Stephens’ intellectual exercise.

From time to time Israel and her supporters should give thanks for having as enemies the Palestinians and their supporters.

As of midday Monday, Hamas had fired more than 1,000 missiles at Israel, aimed more or less indiscriminately, without inflicting a single Israeli fatality. It isn’t every enemy whose ideological fanaticism, however great, is exceeded by its military and technological incompetence.

It’s true that much of the incoming fire has been shot down mid-flight by Israel’s Iron Dome, but Hamas must have seen that coming since the defense system was first deployed during the last round of fighting in 2012. It’s as if the French had concluded from the Battle of Agincourt that the English long bow wasn’t as effective as advertised and would surely fail against a more determined cavalry charge.

Alongside Hamas in Gaza there is the rump regime of Mahmoud Abbas in the West Bank. Mr. Abbas is supposed to be a bystander in this conflict. But he made his sympathies known when, within a day or two of the fighting and with fewer than 50 Palestinian fatalities, he accused Israel of “genocide” and “war against the Palestinian people as a whole.”

“Shall we recall Auschwitz?” he added.

I sometimes wonder whether supporters of the Palestinian cause—at least those capable of intellectual, if not moral, embarrassment—cringe a little at the rhetorical flourish. Bashar Assad, in whose court Palestinian leaders bowed and scraped for a decade before the current uprising, used chemical weapons against the Palestinian refugee town of Yarmouk a year ago and then starved out the remaining residents. More than a quarter-million Palestinians living in Syria for decades have also been made refugees by Mr. Assad’s assaults. 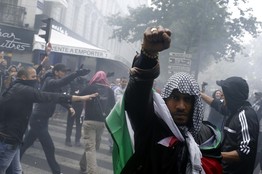 Yet last month Mr. Abbas congratulated Mr. Assad on his re-election: “Your election to the presidency of the Syrian Arab Republic guarantees Syria’s unity and sovereignty,” the Palestinian president groveled, “and starts a countdown to the end of Syria’s crisis and its war against terrorism.”

This detail, reported by AFP, seems to have escaped mainstream attention, though it remains a useful reminder of just who—and what—Mr. Abbas is.

Similarly with pro-Palestinian demonstrators marching in the civilized nations. In Paris on Sunday, one such group of demonstrators tried to lay siege to a synagogue “with bats and chairs,” according to the Associated Press, trapping 150 Jewish congregants inside until police could rescue them. A day earlier, a firebomb was thrown at a synagogue in a Paris suburb. At yet another French protest there were calls for the “slaughter of the Jews.” In Seattle, a Voices for Palestine rally posted signs reading “Zionist Israel=Nazi Germany.” In Frankfurt, protesters held signs reading “You Jews are Beasts.” Police lent the protesters a loudspeaker, ostensibly to “de-escalate the situation,” according to the Jerusalem Post.

Maybe the Presbyterian Church, USA, which last month voted to divest from companies doing business with Israel, will issue a statement of concern. But don’t count on it.

All of which, as I say, is a blessing for Israel and her supporters.

If you must have a nemesis, better it be a stupid one. If your adversary has an undeserved reputation for moderation and sincerity, better that he should give his own extremism and hypocrisy away. If you are going to be the object of mass protests and calumny, better to be hated by the worst than by the best. Israel’s enemies continuously indict themselves, whether or not the rest of the world has the wit to see it.

What if it were otherwise? It has always been something of a surprise to me that Israel’s enemies and critics have usually been too consumed by their own hatred to spot, or exploit, the Jewish state’s most obvious weakness. This is not the narrowness of its borders, or the fractiousness of its politics, or its vulnerability to atomic attack, or this or that ticking demographic bomb, whether of the Palestinian, Israeli-Arab or ultra-Orthodox variety.

The real weakness is a certain kind of vanity that confuses stainlessness with virtue, favors moral self-regard over normal self-interest, and believes in politics as an exercise not in power but in self-examination. People, and nations, with such attitudes cannot be beaten militarily. But they can easily—too easily—be shamed. Witness the outpouring of national self-reproach following this month’s murder of a Palestinian teenager by Jewish assailants. The killing was appalling, but it took Hamas’s missiles to prevent it from turning into an excruciating morality play.

It may someday be that Palestinians will wise up; that the next intifada, should it come, will be Gandhian in its methods and philosophy; that the next Palestinian leader will be in the mold of Vaclav Havel, not Fidel Castro. In the face of that kind of movement, Israeli resistance to a Palestinian state would crumble.

But that’s not the direction in which Palestine is going. Every Hamas missile and every barbaric protest is a reminder that the supreme purpose of Israel is to defend its people, not flatter them.